A good way to discover new wines is to focus on a common theme such as, wines from regions with a Mediterranean climate. This will involve tasting grapes you may not be familiar with and take you from Valencia to Italy, Croatia, Greece, Lebanon, Chile and to south Australia and beyond.

Continental, Maritime and Mediterranean are the three main climate patterns we associate with regions where grapes are grown to make wine. A mediterranean climate is typically one with moderate to warm temperatures throughout the year, with little seasonal change, and a long growing season. Most rain falls during the winter and very little during the summer, which increases the risk of drought.

The grape varieties grown have to be suitable to this climate, grapes that are tolerant to heat and don’t over ripen. Two of the key characteristics of a mediterranean climate wine are freshness and an easy drinking style. Wine is an integral element of a varied mediterranean diet, which we are told is the healthiest in the world.

Let’s begin our journey in the southern part of Valencia and Alicante. Look out for dry Moscatels or those that are blended with other varieties, such as a Moscatel Viura, where the second grapes brings acidity and freshness to the fragrant Moscatel.

Sicily, the largest in the mediterranean, has a feast of interesting wines to taste. This region was considered a source of cheap bulk wines, however over the last 15 years it has become one of the most exciting wine making areas in the mediterranean. Nero d’Avola is an indigenous red grape variety ideally suited to the islands climate, producing wines that are full of red berry character with a hint of spice. Wine makers in other regions with similar climatic conditions from Lebanon the south Australia are planting more of this variety with some very interesting results.

Greece is one of the oldest wine producing regions in the world. A wide variety of indigenous grapes, the names of which are difficult, make some very interesting wines. One of my favourites is Assyrtiko, one of the most widely planted white grape varieties, with its floral aromas, lemon flavour with a hint of salt, making it a very refreshing wine that when served chilled is a versatile food wine.

In the Languedoc region of southern France you can find a wine called Picpoul de Pinet, if you like Albariño you’ll enjoy this wine. The grapes are grown on the in vineyards overlooking the Mediterranean’s Golf of Lyon, producing wines known for their fresh floral and lemon aromas. Ideal to accompany shellfish.

Croatia’s wine regions have some fascinating wines both red and white. The Dalmation coast is where you can find Plavac Mali, the main red grape of the area. The wines are quite full bodied with blackberry and cherry flavours with a hint of pepper and spice.

McLaren Vale, near Melbourne in South Australia is described as Australia’s Med, where the climate is Mediterranean. In this region the cool sea breezes moderate the daytime temperatures.

Garnacha, also known as Grenache, is one of the most popular grapes making wonderful wines, from very old vines grown organically.

There are also the middle eastern wine regions, notably Lebanon, Jordan and Israel. Very interesting wines being made in all these countries.

So as you can see by just focussing on Mediterranean climate wines’ you are going to discover many new and exciting wines. 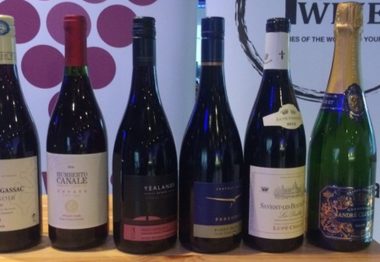