Why age wine in oak barrels?

To age wine in oak barrels adds complexity, flavour and longevity to wine. The intensity and range of flavours that the oak imparts on the wine depend on where the oak is from, the age of the barrel, the size of the barrel, how toasted it is and how long the wine spends inside.

The oak used to make barrels comes from France, United States, and eastern Europe. The French barrels are considered to be the best from the forests of Allier and Tronçais. The trees uses are between 80 and 200 years old. A tree of 100 years may produce enough oak for just two barrels.

The majority of the most prestigious wines in the world will have spent some time in barrels. Top producers will predominantly use the French oak barrels while here in Spain American barrels are traditionally used in Rioja, as they are considered to be best suited for the Tempranillo grape.

The normal size for an oak barrel is 225L, which is traditional in Bordeaux and Burgundy. There are other larger sizes but this is the preferred size for the better quality wines there is a higher ratio of wood to wine which gives greater concentration. Large barrels, such as the Foudre in Germany holds 1000L, do not impart so much oak flavours on the wines.

When you taste a wine that has aromas of freshly baked bread, spices, vanilla, smokey, coffee and chocolate the intensity of these aromas will be determined by how highly the barrel has been toasted. This process involves the barrel sitting over an open fire of wood chips. This strength of the flavours is determined by the intensity of the toasting from ‘light’ to ‘heavy’.

The heat from the fire also allows the cooper to gently bend the wooden staves into the shape of the barrel while at the same time gradually releasing the sweet, spicy aromatic essences. All of these aromas and flavours you will be transmitted to the wine.

Centuries of winemaking experience have shown that the tiny pores in the oak allows oxygen to be absorbed into the wine very slowly allowing the wine to gently mature make them more subtle and complex while softening the acids and tannins. Controlling the rate of the wines maturation is down to the winemaker.

How much oak influence the winemaker wants the wine to have will determine whether new or older barrels are used and how long the wines spend in contact with the oak. A new barrel will impart stronger flavours while older barrels that have been used several times will have less intensity of flavours.

Premium quality wines are often aged for long in barrels before being bottle and aged for a further period of time prior to be released.

A well balanced wine will have fruit aromas and the added complexity of flavours from the oak. Too much oak will over power the wine and leave you feeling that you are chewing a plank.

So next time you notice ‘woody’ flavours in your glass of Chardonnay now you know why.

Wines from places you least expected

The end of the grape harvest

What are Parker Points? 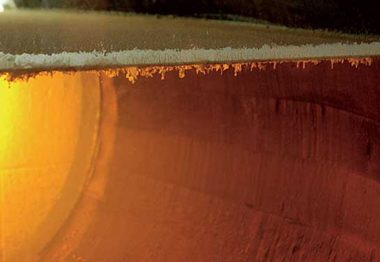