During the second half of the 19th century Phylloxera ravaged vineyards throughout Europe and around the world destroying millions of hectares, in many places leaving landowners and families bankrupt and destitute.    What caused it and what was the solution?

Phylloxera is a tiny louse or minuscule insect that eats the roots of grapes, which weakens the plant and makes it susceptible to other diseases. It came to Europe in vines imported from the US.  The first cases were reported in the Rhone in southern France in 1864, at the time farmers did not know why their vineyards were turning brown and dying.  It was thought that the problem could have been a water borne disease or something in the soil.

The louse spread very quickly and the effects were indiscriminate, vineyards were ripped up and their vines burned to try stop the spread of this problem.  France lost up to 70% of their vineyards, most of which were eventually replanted.

In 1878 the first case of Phylloxera in Spain was recorded in Malaga and a year later in Catalonia. It went on to destroy vineyards from Rioja to the Douro.  Dramatic action was taken to stop the spread of the louse.  This would involved local authorities ordering that an area to be totally cleared with all vines burnt.  Often this would meet with local resistance as peoples livelihoods were destroyed.

The shortage of wine in northern Europe proved to be a boom for vineyards in the Levante region, where Phylloxera did not arrive until 1905.  Exports of wine became one of most important commodities to be shipped through from the port of Valencia.  When it did eventually take hold in the region of Valencia, the effects were as devastating as in other regions.  In fact instead of replanting vineyards that had been destroyed, many farmers decided to plant oranges, which saw a huge increase in the number of hectares with orange trees.

Mysteriously, there were small pockets of vineyards that were never affected by phylloxera.  The most famous of these are two small plots, belonging to the Champagne house Bollinger, planted with Pinot Noir.  To this day these very old vines are still producing small quantities of Champagne called ‘Vieilles Vignes Françaises’, which when released will cost more than €500 per bottle.

Some other areas where there are still pre-phlloxera vineyards are in Galicia, Canary Islands and in Jumilla, in both areas there is a high percentage of sand in the soil.  In the Barossa Valley in Australia there are some of the oldest vines in the world, dating back to 1843, still producing wines.

Eventually it was discovered that some vineyards in the US were immune to this microscopic louse.  The solution was to graft European vines onto the phylloxera resistant American root stock and then replant these vines.  Practically all vineyards around the world were replanted in this way saving the world wine industry.

The problem was thought to have been eradicated but in the 1990’s new cases of Phylloxera have been reported in California and Australia. In fact as a precaution nearly two thirds of the vineyards in the prestigious Napa Valley were replanted.  The world of agriculture requires farmers to be every vigilant. 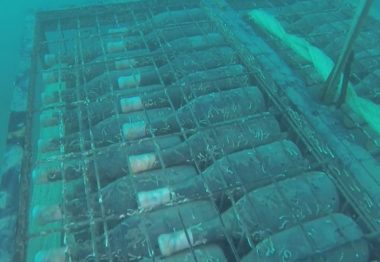 Why are Wines being Aged Under the Sea?