The term Flying Winemakers was first used in the late 1980’s when referring to winemakers who would fly from region to another making wines. They were a new phenomenon in a very traditional wine world. Most of them were Australians who had been trained to make wine using the latest techniques that had yet to be introduced into most regions of northern Europe.

Their influence changed how wine was made on a commercial scale, that is to say the everyday wines we drink today.

The Flying Winemakers began a golden period for modern winemaking. Lifestyles were changing, supermarkets began to grow rapidly and they created a market for wine. It was a time when wine industry became increasingly global. Consumers were ready for something new.

When I was a wine distributor in the UK, I worked with two of the most well known Flying Winemakers at the time Peter Bright and John Worontschak as part of a team producing wines from Spain, Italy, Chile and Argentina.

Wine from the new world: Australia, New Zealand and South Africa, were growing in popularity. Wines that were clean and fruity were popular with the public particularly in the UK and Scandinavia.

Following the harvest in the southern hemisphere, which takes place in February and March, the winemakers would be contracted to do the harvest in northern Europe.

These ‘back packing’ winemakers worked in a different way that often created tensions with local wineries. For example, telling growers to pick the grapes earlier and be more selective, checking the grapes to ensure they had good levels of acid, essential for making better quality wine. This was a seismic change for many growers.

Traditionally in Spain, Italy and France the amount of money growers received for their grapes depended on the level of sugar in the grapes, if the sugar level was higher the more they were paid. There was no real quality control, the grapes were fermented in open cement tanks at very high temperatures. This result was wines that were at best inconsistent and at worst undrinkable.

The itinerant winemakers changed how wines were made especially by using controlled the temperature of the fermentation, much lower temperatures and for longer periods of time. The result was wines that were fresh fruity aromas and were smooth and easy drinking.

However, producing a consistent style of clean and fruity wines was not without critics. Some thought that there was a real risk that all wines were going to taste the same. Fortunately this has proven not to be correct.

Over the last thirty years the wine industry has become much more professional. A generation of winemakers has now grown up using these imported practises, particularly when it comes to better hygiene and quality control.

Nowadays it is interesting to see winemakers around the world travel to work in different countries to experience and learn how others are making wines and to share their knowledge.

Today wine drinkers have never had so many good wines to choose from all around the world.

Interview in The Lifestyle Show 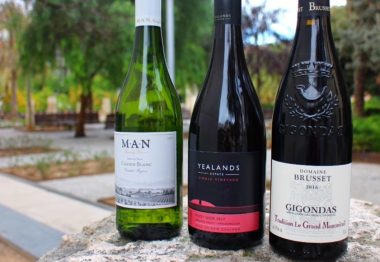