There are many wine competitions around the world where a successful result can catapult a wine from obscurity to world recognition. How do wine competitions work and what are the criteria by which wines are judged?

I was a judge at the Premios Zarcillo, which took place in Burgos from the 6th to 9th September. Over 2000  wines were entered, the vast majority from Spain but some from other countries.

There were eighty judges were made up of professionals from the industry, mostly wine writers, sommeliers, wine makers.  The majority were from Spain but there was also a sizeable international representation.  A notable fact was that there were as many women as men the among the judges.

We were divided into tables of five. On my table the panel was made up of judges from Spain, Russia and Uruguay.

At 9.00 the first wines were poured and we kept going until lunchtime, tasting between 40 and fifty wines each day.  The tasting was blind, which means we can’t see the bottles so we don’t know where the wines are from, the grape variety or the price . All we know is the style of wines to be tasted.  For example, ‘first session’ white wines from the 2017 vintage or reds with some oak ageing from 2015.

Tasting requires silence and concentration. When tasting I evaluate the wine following the criteria set out by the organisers.  In order to get a high score a wine not only has to be well balanced but it also must have an intensity of flavour and more complexity.   I am always hoping to be pleasantly surprised with a wine that has something extra in terms of quality and character.

Every table has a president and each judge has a mobile phone into which they enter the scores for each wine.  Firstly points are awarded for the appearance and colour, then for the intensity and quality of the aromas and finally the taste, body and complexity of the wine on the palate.

When the president of the table has received the all the scores he or she informs the judges of the results at which point we briefly discuss the wine.  Often there were differing opinions about a wine.  If there was a difference of opinion regarding the points we agreed that a majority decision would determine the result.

One of the criticisms of wine competitions is that they can be a lottery.   Like any competition luck is required. Is it better to be one of the first wines to be tasted or the very last wine when judges? It depends.

Tasting so many wines can be difficult, especially when the wines are young and immature or very similar or when the quality is poor.  There were sessions when we struggled to find any wines that deserved a medal, other times medals were being awarded frequently.

Following the tasting there is nothing better than a cold beer to refresh your palate.

Never forget that tasting wine is subjective.  An award winning wine does not mean that you are going to enjoy it more.  My advice is taste as often as you can and trust your palate to discover the best wines for you.

Which Wine to bring to a Dinner?

How to Improve Tasting Skills 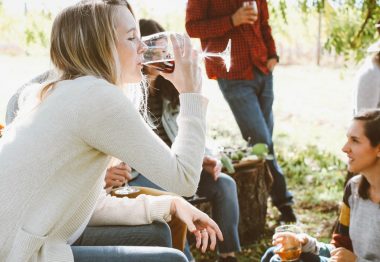