Garnacha – The Queen of Aragon

Garnacha is the grape variety that dominates the Denominaciones de Origen (DO’s) of Calatayud, Cariñena and Campo de Borja in Aragon. This corner of North Eastern Spain has a growing reputation among winelovers around the world, for Garnachas with personality and a strong sense of place.

The landscape of Aragon is desolate, arid, vast swathes of red clay and granite soils and high mountain ranges. Its beauty is dramatic but the conditions are severe. An extreme continental climate with freezing winters and very hot summers, a wide variations in temperatures and hardly any rainfall. Frost is a risk well into the growing season, drought is constant problem. Hail storms pose a serious threat at any time, particularly during the late summer and early autumn during vintage.

Yet vineyards of very old vines at altitudes between 400 and 1000m, influenced by mountains, microclimates, long hours of sunshine, cool breezes and a wide range of different soil types provide the conditions for growing vineyards with very low yielding, high quality Garnacha. To fully ripen Garnacha needs heat, so Aragon’s long hot summer days suit this grape. Also, very importantly, improved viticultural and winemaking techniques are resulting in wines to compete with the best Garnachas from anywhere in the world.

Historically wines from Aragon have had times of boom and bust. They were considered good as bulk wines because, adding body and alcohol to blends. However, the quality was not good, a main defect being wines made from Garnacha tended to oxidise relatively quickly. This was more a result of farming and winemaking, but it was a result of being paid very little for their grapes so there was little incentive to control of yields or quality. In fact during the 1980’s many thousands of old vines were uprooted because they were not profitable.

Today it is a different story. While international markets have never been more challenging, there is renewed hope within the traditional cooperatives, private wineries and small individual growers all pursing their objectives working with Garnacha.

In Calatayud the Bodega San Alejandro, a cooperative, has invested in technology to map the vineyards, monitoring all aspects of the vines growth to allow them to select the best sites to makes wines with colour, structure or potential for ageing. This is a model I have seen working well in France and is being used more around Spain and is essential not only for the survival of cooperatives but also to improve overall quality, and make with local character and their own distinctive personality.

You also find individuals like the Master of Wine Norrel Robertson from Scotland, known here in Spain as ‘El Escocés Volante’ or ‘The Flying Scotsman’, who has lived in Calatayud since 2003 and has enjoyed considerable success with his wines. His experience having made wines in France, New Zealand, South Africa and South America has made him see the huge potential that exists for Aragon to make wines from Garnacha with character and flavour.

Bodegas Borsao in Campo de Borja, known as the Empire of Garnacha, has enjoyed phenomenal success particularly in the US, where legendary wine critic Robert Parker describe their wines as being “My favourite value winery not only in Spain, but in the world”. Look out for the wines of Borsao, which are widely distributed and continue to offer excellent for money.

Pago Ayles, near Zaragoza, in Carineña, was the first estate in Aragon to be awarded the status of being a ‘Pago’. The 47ha’s of vineyards are set among a 3000ha. estate, which is a protected area and home of many rare species of birds and other wildlife. The wines are made by the talented winemaker Jorge Navascués with Garnacha being the main component of the blends.

Fernando Mora, also a Master of Wine, describes Garnacha as a being like a diamond with many faces, colours and expression depending on where it is grown, the soil, the altitude and exposure of the vineyards, the age of the vines and the microclimates. His project is Bodegas Frontonio, where they have 18 different plots in Valdejalón and the Barrandijos Valley in Alpartir, growing grapes that will make wines with the maximum expression of each small vineyard. His wines are highly sought after and today their wines are exported to 37 countries.

It is exciting to see so many projects that will draw the spotlight of attention on the kingdom of Garnacha. It would be fun to arrange a tasting to compare and contrast the wines of Aragon with other Garnachas from around the world. 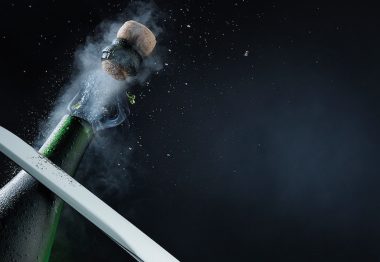 How to Safely Open Champagne