Last week I was at Prowein, Dusseldorf.  It is an enormous event that stretched the city’s services to their limits and beyond; watching train after train pass by packed  full of disgruntled passengers all going to the trade fair on the edge of town and queues for taxis stretching for more than one hundred metres. A twenty minute journey in the morning took an hour. Top restaurants had lines, more like those seen at fast food joints, of people bustling trying to get in.  Hotels rooms tripled in price for the three night stay.  I was even ‘gazumped’ on the first apartment I booked, thankfully I found a really cool place in a quiet part of town away from the hustle and bustle.

It is both an awesome and daunting fair, with wines from every producing country on earth.  It is easy to become overwhelmed – think animal frozen by headlights of a car – by the vast choice.

I was able to catch up with some of the producers whose wines we have enjoyed at TheWinePlace.es and with those whose wines will be coming to Spain in the near future.  As a small, exclusive club of wine enthusiasts curious to experience wines from around the world, TheWinePlace.es allows the producers to add Spain to their list of export markets and get feedback on how their wines are received.  It was great to meet people such as Xavier Gomart, MD of Cave de Tain, Rhone Valley, from where we import Cave de Tain Les Hauts du Fief.  Also the guys from Tabali in Chile, the producers of the delicious Late Harvest Muscat.  One of the most popular New Zealand wines that we brought was that from Sileni, it was good to catch up with Graeme Avery and his team.  I also tasted with a view to adding wines to the Discovery Selection and I am particularly excited about the Omera Pinot Noir from Oregon and the wines of Peter Yealand from New Zealand.  More to follow…..

There is an ever expanding list of countries exporting their wines that traditionally have been consumed locally, such as Croatia, Greece and Lebanon. Wines virtually unknown to the wider wine drinking public unless they had gone there on holiday.  Some really excellent Greek wines with totally unpronounceable names.  I am working on how to get use my distribution network to bring these wines to TheWinePlace.es members in the future.  Curiosities that I came across included wines from China.  I must say I wasn’t very impressed with the quality of the wines, fairly thin and characterless, but the Chinese are investing heavily planting vineyards and building wineries.  How long will it be before they start producing decent wines on a large scale? 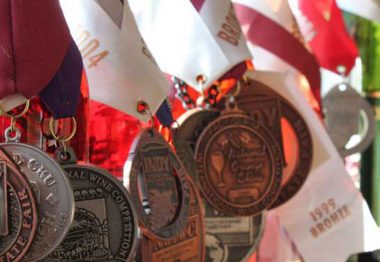 Does winning awards influence how our wines are chosen?

This website uses cookies to improve your experience while you navigate through the website. Out of these, the cookies that are categorized as necessary are stored on your browser as they are essential for the working of basic functionalities of the website. We also use third-party cookies that help us analyze and understand how you use this website. These cookies will be stored in your browser only with your consent. You also have the option to opt-out of these cookies. But opting out of some of these cookies may affect your browsing experience.
GUARDAR Y ACEPTAR